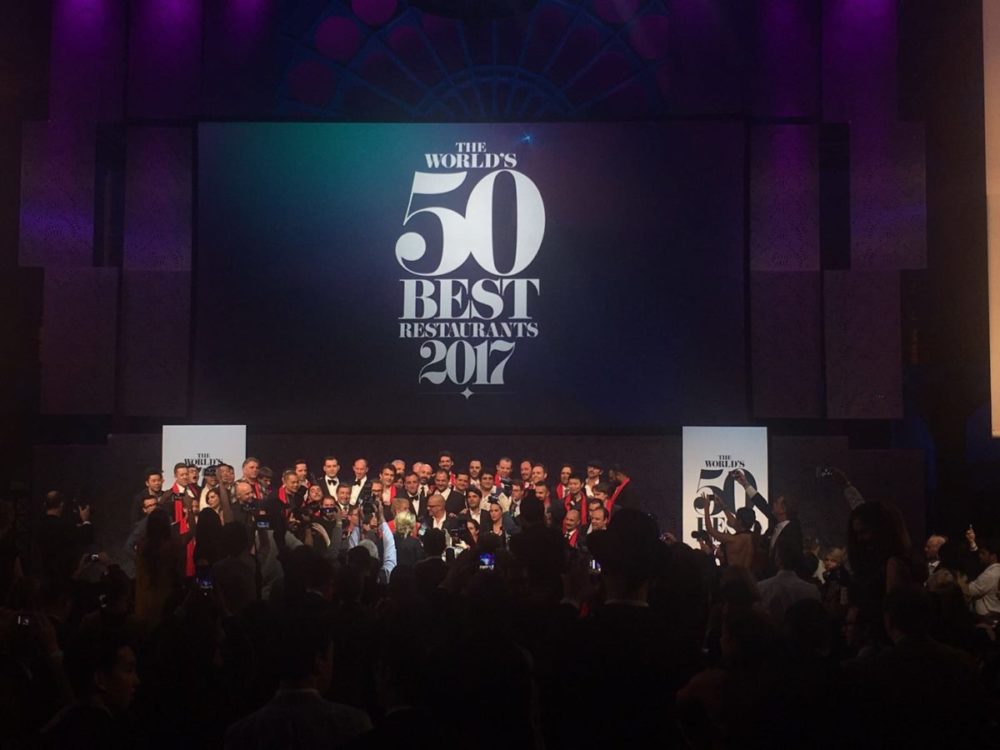 Events Leading Up to Awards Night

Saturday night, post Masterclasses, we caught a great meal at Ides with I-hua and Aaron, fellow Tastemakers and Melbourne locals. Zoe Bowker from Dubai joined as well but enjoyed her dinner from the bar with another journalist. The chef from Ides, Peter Gunn, previously worked at Attica under Ben Shewry (one of the chefs painted on the iconic Melbourne mural).

Chef Gunn himself served our table as each beautiful dish was ready from the kitchen providing explanations of ingredients and how to properly enjoy the contents off the plate. Our favorite aspect of fine dining is the staff advising how best to consume the bites for maximum enjoyment! Standout dish (pictured) Moreton Bay Bug Meat seared in ginger oil with spring onion and pumpkin soup. The warmth of the soup offered a smooth, balanced texture propping up gentle flavors of the lobster (bug meat). 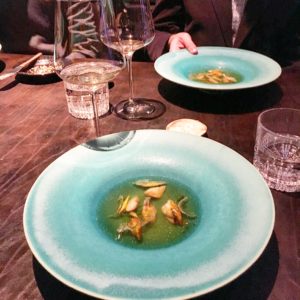 Monday was a day full of Tastemaker activities! We kicked the day off celebrating World’s 50 Best Social Media Manager, Emer’s birthday while gathering the crew at Restaurant Supernormal with Managing Director, Timothy Brooke-Webb and author, Laura Price treating us all to a superb 7 course meal! As you can imagine, getting this group together, everyone was on their phone the entire duration gathering up content for future posts. haha! ridiculous really – look at us. 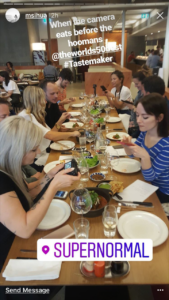 After lunch, we all strolled together to the chef mural underway. The artist, Heesco was there finishing Heston Blumenthal’s portrait. 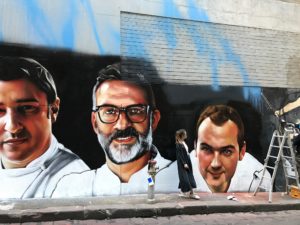 The mural captures the essence of culinary excellence from left to right: Ben Shewry of Attica No 32 (not pictured). Joan Rocca of El Celler de Can Roca  No 03. Massimo Bottura of Osteria Francescana No 02. Daniel Humm of Eleven Madison Park the No 01 restaurant in the world for 2017. Heston Blumenthal No 36 (still underway at this point but completed in time for Awards).  Fun fact: We’re the couple constantly displaying affection in public. Emer caught us kissing in front of the mural and Massimo liked it well enough to share the photo with his followers captioning the moment as “Fine Dining Lovers.” click here to view.

To close an already perfect day, we attended 50 Best talks with a solid panel of chefs including Jordi Rocca, Daniel Humm, Will Guidara, Grant Achatz and Gaggan Anand. This was a thoughtful discussion surrounding the driving forces behind the successes of these chefs and their personal milestones, trials and tribulations as well as the impact social media has on the future of the culinary landscape.

One inappropriate audience member asked Gaggan for a job during the Q&A. He handled it eloquently and asked her to take the discussion off line because he genuinely has a heart for this desperate person making such a bold move in public. Gaggan grew up in extreme poverty and shared very candidly that he took it upon himself to change the course of his life and the fate of his family.  An absolutely tearjerking narrative of one man’s conscious decision to harness the endless possibilities of life and manifest his own destiny.  He is a true inspiration and worked diligently to reach and retain the No 01 spot three consecutive years as the chef of Asia’s Best Restaurant, Gaggan located in Bangkok, Thailand. 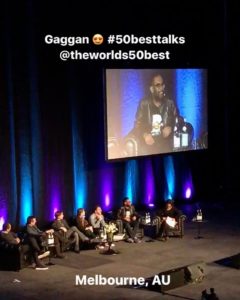 The long awaited night had finally arrived! The event was both black tie and cocktail leaving it entirely up to the guest how gala they wished to make the evening. Most opted for cocktail attire but there were a few tuxedos roaming the Royal Exhibition Hall. The World’s 50 Best does not sell tickets to their awards ceremonies. They are by invite only to help maintain exclusivity of the event. This is only the second year that the awards were hosted outside of London. In 2016, NYC was the first offsite location and now Melbourne opening the door for additional cities in the future to bid on hosting the event. In attendance are chefs, VIPs and media. All Tastemakers were considered VIP guests which dictated seating and sped up the check-in process.  Below is the gorgeous Royal Exhibition Building lit up in all its glory. 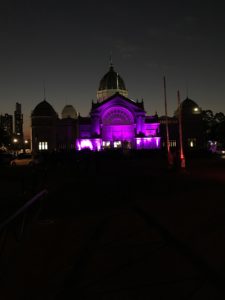 The Australia Tourism board enticed William Reed to host the ceremony in Melbourne with their willingness to drop roughly $800,000 USD for the global publicity that doing so would bring. There were roughly 900 guests from around the world gathered to count down the best 50 restaurants of 2017.

Upon arrival we were ushered down the red carpet for photos, then into a foyer with numerous servers furnishing endless cocktails and hors d’oeuvres. 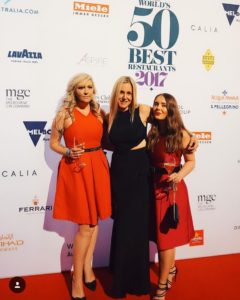 Once we took our seats, the countdown began with the most refreshing, funny moderator who somehow made reading off names both funny and interesting. He moved fast which was welcomed since we were arm-to-arm sandwiched into rows of perfumed gowns and suits anxiously awaiting the unveiling of the worlds best restaurants. Find the 2017 list here. 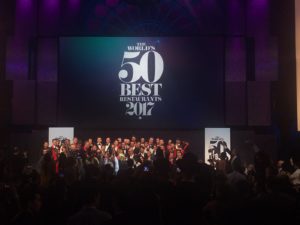 We caught up with Massimo and a host of other chefs to congratulate them as they roamed the afterparty.  B and I lasted until midnight then hailed a taxi to our air BnB.  The rest of the group went on to enjoy a 2nd and 3rd afterparty celebrating into the wee morning hours. 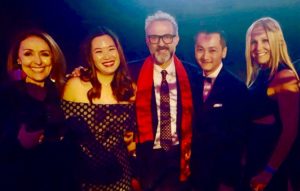 I did my best to entice Gaggan to visit Nashville, but he probably did a better job of convincing us to visit Thailand. 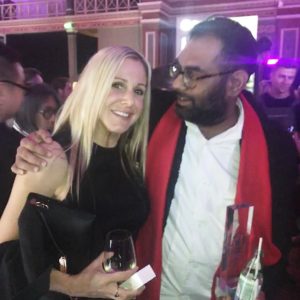 The entire event was extremely well planned and executed.  It’s a gathering of family united by the love of food and friendship. People who demonstrate “citizen of the world” mentalities – everyone is welcome and they know it. It’s amazing how the problems of the world, (the hot topics of politics, race, economics) that divide humanity are checked at the door.  At this event, ethnicity is celebrated, diversity is embraced and pretension is no where to be found. At this event, we’re just family.  We love our involvement in the food community as cuisine is truly the world’s common denominator providing a sense of genuine connectivity across hemispheres.

Next up. Our final Australia Memoir 3 highlighting wildlife on Phillip Island and our most romantic meal of the trip.